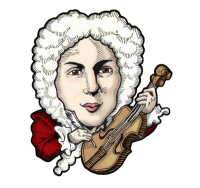 Elcurarojo owes its name to the great composer Antonio Vivaldi who was known as “il prete rosso” (the Red or Ginger priest) due to its priesthood and hair colour.

George Philipp Telemann is considered the most prolific composer, not only in the baroque era, but in history.

With a production of more than 6000 pieces mixing both vocal and instrumental works, Telemann left us a legacy of some very important masterworks for wind instruments like recorders and the oboe.

For this reason and commemorating the 250 anniversary of his death in 2017, the spanish group “Elcurarojo”, present this monographic, conducted by its director: Alberto Domínguez Gálvez.

This is the title which gives name to the first work with which Elcurarojo presents its repertoire, a repertoire based on concerts as soloist for small sizes of recorder like the soprano, soprano in D and sopranino.

The use of these small recorders with such a distinctive high pitch sonority in a chamber orchestra ensemble, together with instruments with powerful low register notes such as the Theorbo or the Baroque double bass, make this show very special and particular for the listener.

The concerts introduce varied typologies and groupings. When it comes to the works of english composers William Babell and Robert Woodcock, whose concerts are written for 4 violins, basso continuo and a Sixth flute as soloist, they are not very usual for chamber concert groupings of the XVIII Century. During the different movements the violins acquire more relevance intereacting with each other and with the soloist flute.

Nonetheless the concert for soprano recorder by Giuseppe Sammartini and the concert for sopranino by Antonio Vivaldi introduce the more usual grouping instead of violins and viola and the typical Italian configuration of three movements “Allegro-Largo-Allegro” in which the tutties of the orchestra gradually intermingle with great recorder virtuoso passages.